After countless hours of updating and working with the team we are proud to release our brand new Skyblock Season! This season will be the the new base for all future seasons, you will understand the more you read this post!

The base server version will now be 1.16.5 which means that we have all the features Minecraft has up until 1.16.5! We recommend you connect with this version, however, you can still connect with other versions like 1.8 & 1.12!

We've made a lot of changes to the server because of the 1.16.5 update. The main spawners have changed, we increased prices for certain spawners and made some other spawners easier to get.

The main economy will be Zuglins, Foxes, & Bees!! If you are on lower version, you will see other mobs but they will still work the same way.

Robots had a lot of issues this season and last season. We've completely revamped the way robots work because we wanted to make the server a bit more grind based. Therefore we added a storage limit and tiers to robots.

You can of course also upgrade the storage, fortune & speed of the robots to get better outcome from them! likewise, you can merge two of the same tier robots into the next tier!

Another crucial change, we now have 4 different types of robots, Grinding, Mining, Farming and Woodcutting. (NOTE: grinding robot now kills X amount of mobs instead of them all)

To upgrade robots, you will use the mineshaft currency called "Gems"

There were a lot of improvements that could be made to the mineshaft, so we did exactly that! Mineshaft zones are now 2.5x larger, there is now more mobs and more ores as well! The loot tables were fully reworked to make the higher tier zones a lot better.

The ores in the mineshaft had a significant change. You can now farm gems from there and the ores will also respawn at the same location they were mined at (To prevent AFKing, mobs will be around ores)

This is something we wanted to do for some time and now we can! every client version that is 1.12+ will be able to download the FadeCloud texture pack which will have a bunch of cosmetics that can be obtained from the server! 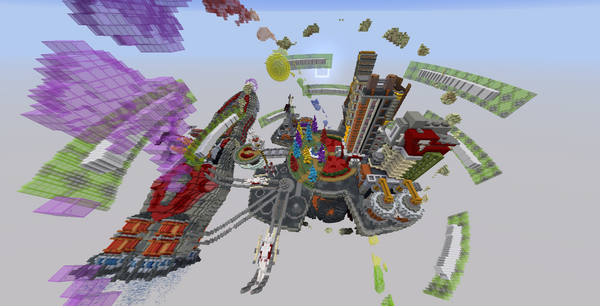 Hello Faders,After countless hours of updating and working with the team we are proud to release our brand new Prison Season! This season will be the the new base

Hello Everyone,As you all can see we have a new website that will is a lot more light weight and responsive then our old forums. We chose to go