Season 0 taught us a lot. As a public beta testing season it was a hit but it also had its issues..
This season, we hope to bring you more features and a better experience!
Continue reading to find out everything we have changed!

RELEASE TIME:
4 PM EST - January 29th 2021
(Survival Earth will be releasing at the same time so make sure you show them some love too! Its also our first ever dual release!)

The basics have not changed... much

The objective is the same. Make a cobblestone generator and place island value to upgrade as you go. The goal is to have the highest value at the end of every month.

Everyone will start off at their respective rank. Bedrock will not be available right from the beginning as players have to grind for it.

Island Creation has changed a little. Instead of just doing /is create you will now be required to provide an appropriate name for your island. The command is /is create (insert your island name) Keep it clean and friendly! I added this because it gives your team a little flair. (WOO)

Cobblestone generators got a MASSIVE buff. As you progress you will unlock new ores but we have also added in the full ore BLOCKS. Keep upgrading and youll eventually find them. Rumor has it if you get a really high island value then youll never see cobblestone in your grinder again!

Custom enchants had a lot of bugs. There were issues with some enchants not working, destroy rates not even doing anything. So instead of trying to fix these endless issues we scrapped it and made something COMPLETELY NEW.

We bring you Mob Essence. Essence is a currency you get from grinding specific mobs. Instead of purchasing them using XP, you have to purchase them using Mob Essence Skulls. There are a total of 47 enchants/effects to obtain with various tiers to them!

Dont worry about filling up your inventory with mob skulls, as you collect them you can deposit them in your own personal Essence Bank! All purchases for enchants and effects will only pull from your Essence Bank.

If 47 enchants to grind out is not enough then we may add some more features in the future!

We have added island upgrades. There is currently a cap on how much you can place in terms of Pistons,Farmables and other things. You can also increase your island border size with the island upgrades to a total of 501x501 (last season the max was 301x301)

With the introduction of Essence, we had to change around spawners. They dont count for as much island value as last season but we added in 5 EXTREMELY RARE spawners that will definitely boost your island level. Also, they drop FULL blocks ranging from Iron to Netherite!. With this said, I would like to introduce you to the Big 5.

The Spawn may look the same but the PVP area has been changed. Instead of a big open field its now a 97x97 box.

We also did away with the old KOTH system and we added in a new and improved King Of The Hill. At the 4 corners of the PVP arena you will find beacons that are blue, green, red or yellow. When Koth runs you will have to run and find the point that has a flame particle effect. Hold that point for 3 minutes and then... youll have to find the next point... Koth has been changed completely! Youll now have to capture 3 posts back to back in order to gain some sweet rewards from our NEW Koth Crate. If you capture 1 post but someone else captures another, your score resets. First to 3 wins x3 KOTH keys!

There are a lot of changes here and I truly hope you guys love them as much as I do! I hope to see you guys here after you check out Survival Earth this coming Saturday!

Hello Faders,After countless hours of updating and working with the team we are proud to release our brand new Prison Season! RESET TIME: 4 PM EST - February 12 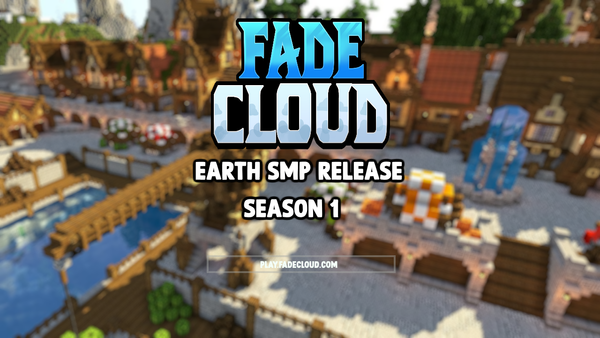